When the star moves, it leaves a trail in its wake.
Can you fill the whole night sky with its trail?
The mysterious objects floating in the sky are warp holes.
They are paired according to their appearance, and when the star goes into one of them, it reappears out of the other.
Touch a square to move to it, and make sure the star moves through all of the squares.
You are not allowed to go through a square that already has a trail on it.

There is more than one route the star can take, but let's look at an example.
First, move to the right and aim for the warp hole at the top-right.

Continuing on from hint one...
After warping to the bottom-left, move down, right, up, right and down.
Then follow the outer edge to each the warp hole at the top-right.

Continuing on from hint two...
After warping, go left and along the outside edge to reach the warp hole at the top.

Continuing on from hint three...
After the final warp, go to the right and then fill the remaining squares with the star's trail.

The answer is as follows. 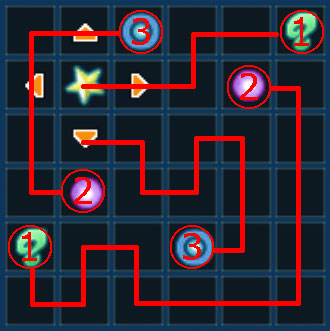